Richard Hore 2015 for The Empathy Circuit, Brentwood Gallery. Let us for a minute suspend the constancy with which the “mind” has been the godhead of our existence within this universe, simultaneously the demanding master and needy child of our relationship with all both within and with-out ourselves. Decapitation of the autocracy of selfish consciousness, an Acephalic move towards a greater participation, a greater unity with the world that does not rest on us tracing our own image into the vast constellations: Narcissus, put your mirror down.
Let us for a minute lose the conception of the subject-object, self-other dialectic that has plagued our theories.

Immanuel Kant was so close to the truth when he said that beauty is not objective but instead rests on a Subjective Universality; the relationship we have with the beautiful object, indeed any object, being a constant transference of energy, a reciprocity, between our gaze and what we are gazing at – hold that, strike that, it is never so passive as “being looked at” it is never so active as “I look”.
Into the theatre, the curtain up - enter stage left: Dr Jasmine Pradissitto. An artist with a PHD in Quantum Physics and one whose research into the quantum world is presented with a stunning sensitivity and a visual flux that leads us to further examine this relationship between subject and object, work that not only leads us to talk about art, but further, deeper than that, actually allows us to talk to the art itself.
Being in this theatre with Pradissitto’s work, one soon realizes that there is no static seating plan, indeed you are encouraged to move around and through the work and, whilst we navigate it both physically and mentally, we realize that unbeknownst to us, the dramatis personae has been extended. This is where Pradissitto’s knowledge and use of Quantum physics comes into the fold, and for me, helps us towards a dismissal of the traditional subject-object relationship. In the caesura between that [ - ] is the most overlooked component of this relationship. In the space between “you and what you look at” is not void, is not emptiness, but instead Light, and in quantum terms this light is not some ephemeral concept but instead is made up of photons, which are in themselves, objects, things, matter: the term should not read subject – object, but instead should be the conflation subjectlightobject (sic).
To further delve into these thoughts right now would perhaps lead you to think that Pradissitto’s work is so conceptual, so academic and technical that all aesthetic beauty is secondary, if at all present. This would be to mislead you. Let me instead touch on the delicacy with which Pradissitto crafts her plastics that feather and spider-web themselves around iridescent death masks, their surfaces giving us not a singular static object but a fluctuating multiplicity that playfully cajoles our relationship with our embodied space, the “things” in that space and the light that dances and trips between us.
Likewise, to foreground the scientific expertise with which Pradissitto invests her work would be to lose the charm of what could be seen as a somewhat arte noveau style within the delicacy and detail of elements of her work that then sometimes give way to aesthetics of abstraction. Pradissitto offers up a fractured visual plane, a fluctuating visual field, upon which, pictorial traditions and art theory meet and copulate with quantum theories and scientific methods, she welcomes us to the Quantum Age with a astoundingly proficient artistry that leaves one embodied, empowered and present in a world that will oft leave us unanchored and lost.
Her influences and the trajectory of her research must be taken as co-dependant of each other rather than viewed in any hierarchical order to fully appreciate the power of her work; where subject meets light meets object so too does art meet science, and that tempestuous union comes to a fascinating, joyful and life-affirming climax. 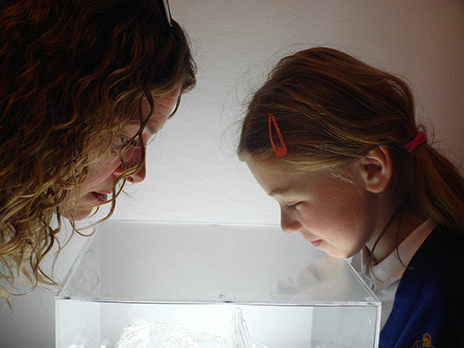